At the conclusion of round two matches of the Sunraysia Table Tennis “Cash Converters” summer pennant one matches Exposed Signage/Apparel are the only team to remain undefeated. 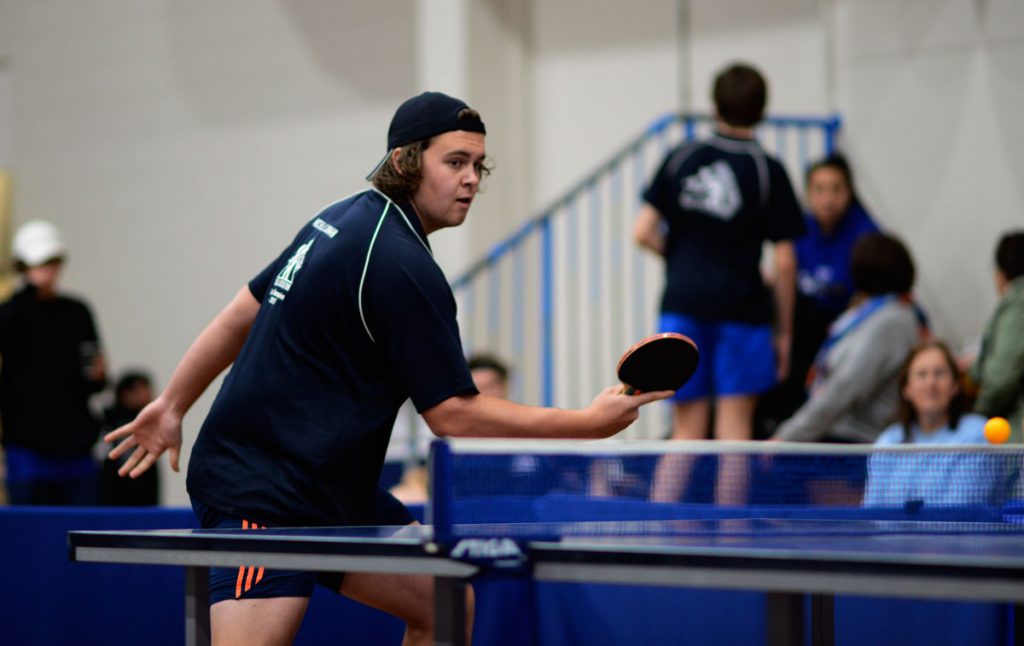 Dorman’s first singles was a marathon against fill in Andrew Cannard and went to the wire with the final score line indicating what a close match it was 5-11 11-8 10-12 15-13 13-11. Both players traded many fine blows however it was a mix of power and soft hands that enabled Dorman to grab the points. To cap off a successful night Dorman also took part in both doubles victories.

Regional Taxation Services recorded their first win for the season with a 7-4 victory over Weightmans Packaging. 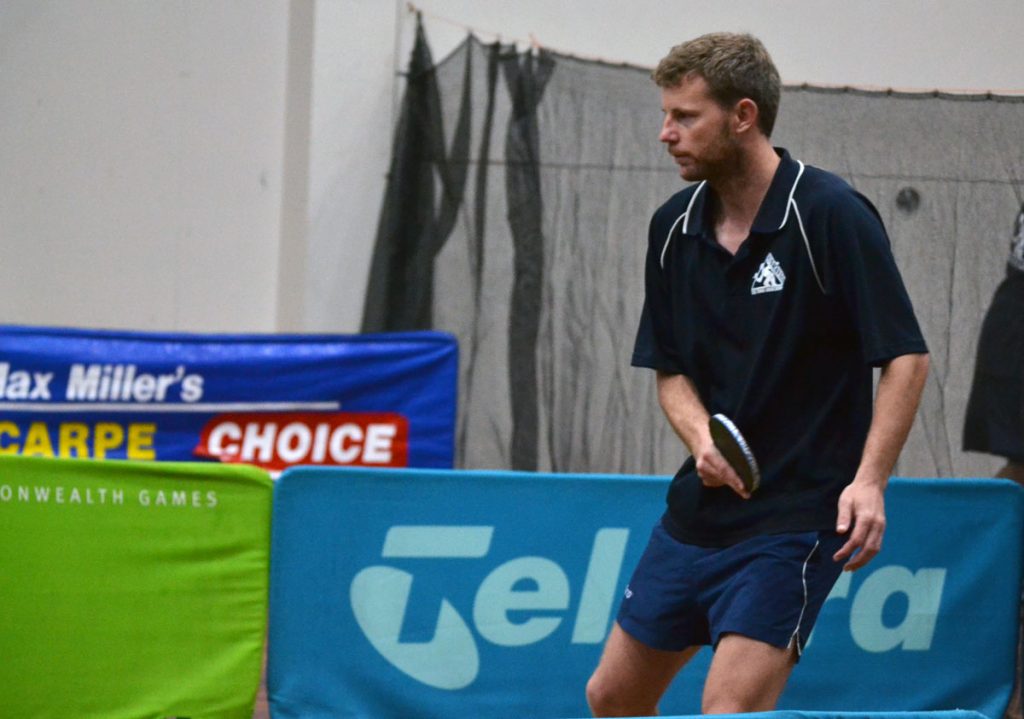 In the final match Cash Converters proved too good for Mallee Bearings winning 6-5 despite Matt Avers winning three singles on his 17th birthday. His match against Matt Ljubic was one of two tremendous five set matches in this contest.

Avers and Ljubic are very talented players and in particular the first three games were top class with many fine rallies. At this point Ljubic was two games to one ahead however Avers was able to turn it on in the fourth and fifth to pull away to a 7-11 13-11 8-11 11-4 11-2 victory.

In a crucial result for Cash Converters the second doubles was huge when Ljubic combined with Kate Carmichael to win 15-13 7-11 11-8 9-11 13-11 over Avers and Shane Carmichael. For the victors Matt Ljubic and Kate Carmichael won two singles each while fill in Leon Brown won one at a crucial time.

Geoff Wright’s team has got off to a flying start in this competition, with 8-3 wins in the first two rounds.

His team made short work of Mallee Meats in this game – Mallee Meats were at a distinct disadvantage with captain Jason Gifkins having missed last week; number two Geoff Peter absent and Sony Sefer filling in.

Wright was dominant, conceding only 13, 16 and 12 points in his three singles rubbers.  Needless to say, he won them all in just three sets.

Peter Midgley’s Mallee Bearings team came back from a 1-4 deficit early in this game, to defeat Max Miller Carpets 6-5.

The Mallee Bearings pair of Russell Walder and Michael Hensgen were on fire early in this game – Walder took a good five set win against veteran Andrew Jones, Hensgen followed up with his own five set win against a very determined Quentin Clark 11-4, 12-10, 14-16, 8-12, 14-12.  Then they paired in the first doubles, outplaying the more experience pair of Midgley and Jones to take a fairly effortless 12-10, 11-4, 11-7 win.  Hensgen and Jones played straight after this game, Hensgen showing good form with a four set win.

So that made it 4-1 after five rubbers and Max Miller Carpets were looking good.

But it was not to be, as Mallee Bearings took the next five rubbers to steal the game.

Having taken the early singles rubber against Rohan Reimers, subbing for Tony Malycha, Midgley continued his winning ways against  Walder and Hensgen to record three wins.  Jones and Clark also defeated Reimers to clock up five rubbers, and with the second doubles going to Midgley and Clark in four sets against Walder and Reimers, the job was done. 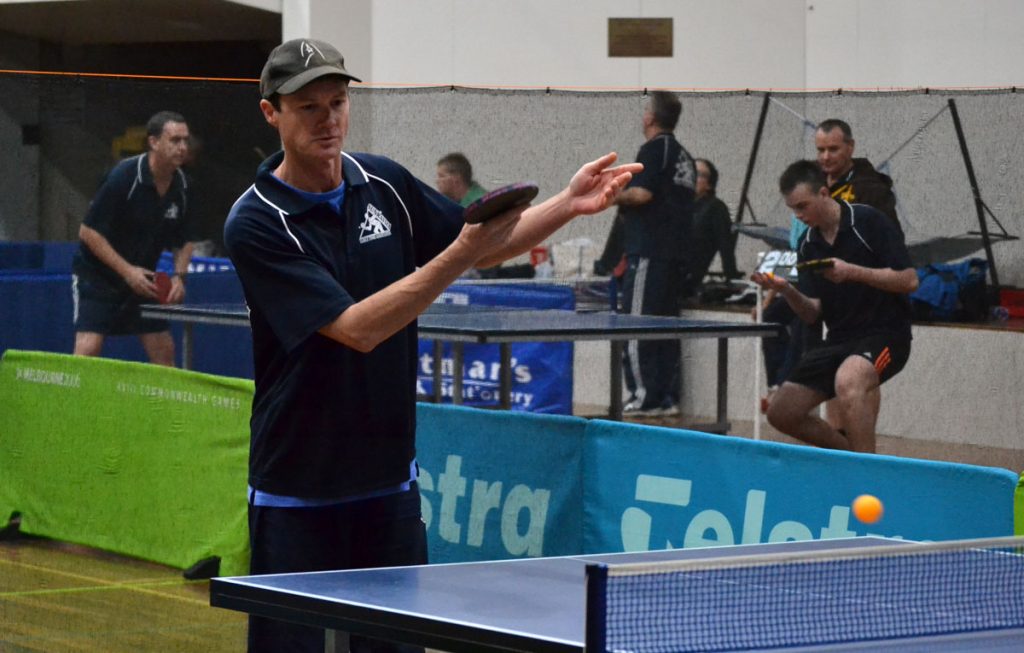 Walder defeated Clark in the final rubber to bring the score back to 6-5.

MJM Automotive were perhaps a little lucky to get the win in this match against Weightmans Packaging.

Certainly Thanh Nyugen was the class of the field, winning his three singles rubbers (in four sets against Arthur Paar and Nick Barlow), and in three against John Fitzpatrick, up from Pennant Three, subbing for the injured Kerry Wallace.

It was Fitzpatrick who almost caused the upset, and came close to taking the rubber against Claire Ljubic.

Playing his first game in the higher grade, John not overawed by the occasion, went down fighting to Claire 13-11, 5-11, 6-11, 11-8, 8-11.  That was the only five set rubber in the whole match, and with Nyugen winning his three rubbers, all the other matches went as expected.

The doubles rubbers were shared – Paar and Nick Barlow much too good for Nyugen and Anthony Fox winning in three, and later Nyugen and Ljubic had too much for Paar and Fitzpatrick, winning that one in three sets also.

Mallee Meats avenged last week’s defeat with a big win against Tankard Dental, while MJM Automotive, also a loser in round one, got the better of Sammy’s Slammers.

Mallee Meats easily accounted for Tankard Dental in this round two match.  With only three rubbers going beyond three sets, Jeremy Corrin and his team wrapped the game up fairly easily.

Both Corrin and David Sergi scored three singles wins – disappointingly the only rubbers Tankard Dental won were solitary rubbers to Arnold Jago and Sabrina Fitzpatrick in their defeats of Therese Fitzpatrick. 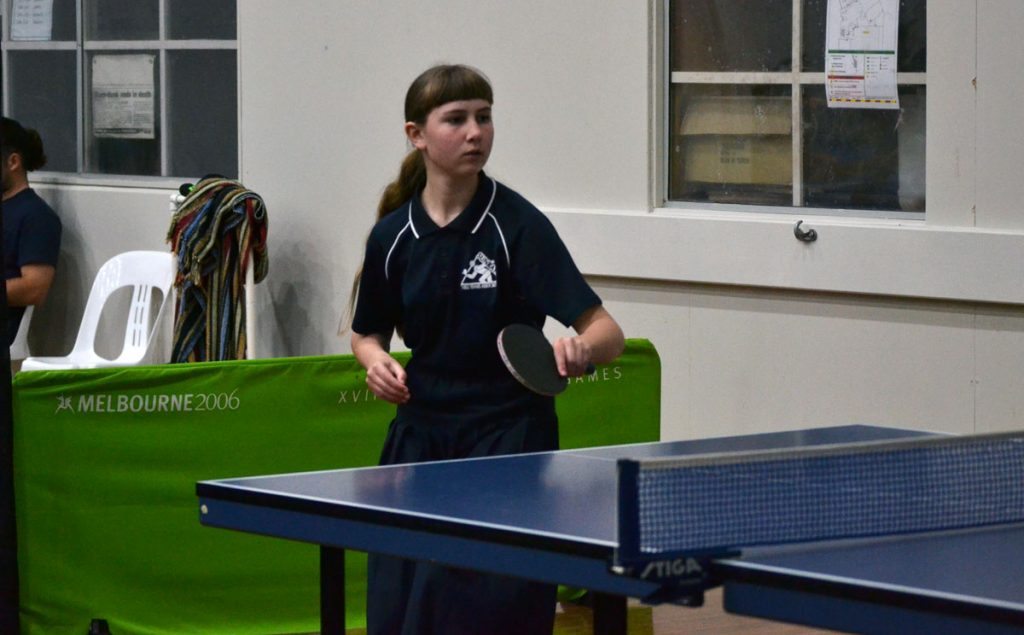 With players of the calibre of Sabrina Fitzpatrick and Arnold Jago playing at one and two, Tankard Dental will no doubt improve this season – having a bye in round one was not really the ideal start for a season.

MJM Automotive took wins where they could to defeat Sammy’s Slammers.

Sammy’s Slammers captain Paul Fitzpatrick is playing with his old verve this season, and is doing all he can to get his team across the line.  He became more aggressive as the night went on, he dropped a set to Tom Morrison in the first round of singles, conceded 20 points to his sister Rachel in round two, then did the same to his father, Peter when the two captains met in rubber number nine.  In the first doubles, he and Marcus Cimino had a great tussle with MJM’s Peter and Rachel Fitzpatrick, before winning 11-8, 8-11, 11-6, 10-12, 11-5.  The only rubber Paul failed to win was the second doubles, he and Leonie Dunkley falling short 11-5 in the fifth set to Peter Fitzpatrick and Tom Morrison.

Unfortunately for Sammy’s Slammers those four rubbers won by their captain were all they got for the night – the MJM trio all beat Cimino and Dunkley in singles play to secure six rubbers, then took that second doubles to make it look good. 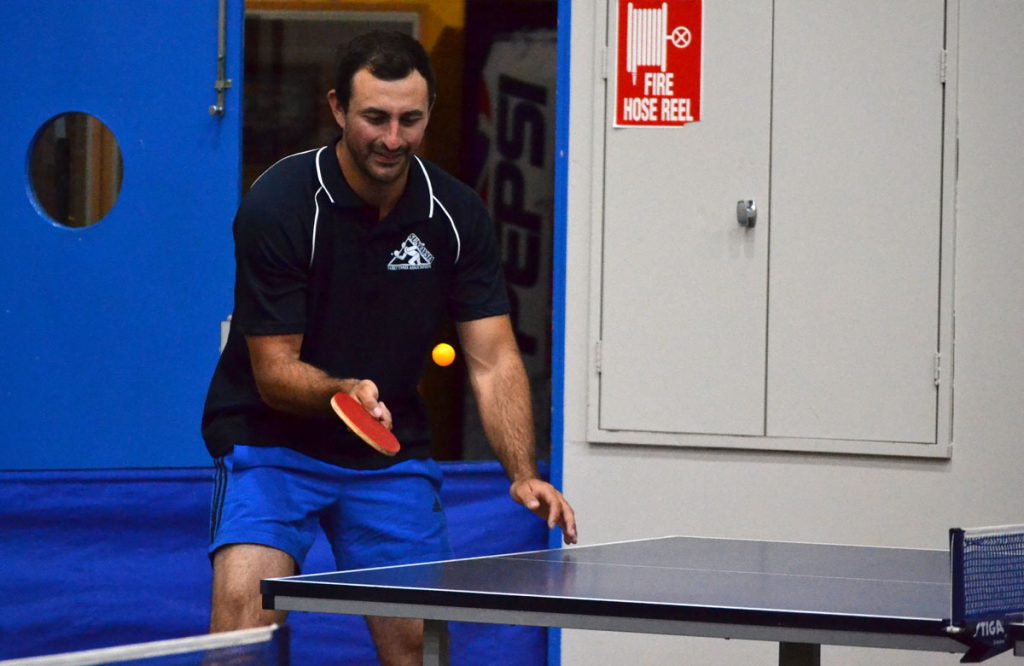 Marcus Cimino is capable of better performances, and once he hits his stride, Sammy’s Slammers will become consistent winners.  Leonie Dunkley put in a couple of solid performances in this game, although losing both, she took both Rachel Fitzpatrick and Tom Morrison to five sets.

Mon Sep 18 , 2017
PENNANT 1 At the conclusion of round two matches of the Sunraysia Table Tennis “Cash Converters” summer pennant one matches Exposed Signage/Apparel are the only team to remain undefeated.