After taking an early 3-1 lead in this game against Mallee Meats, Regional Taxation Services faded away to lose 6-3.

A controlled four set win by David Sergi over Marcus Cimino in the first rubber gave Regional Taxation Services the start they wanted.  And when Sam Hensgen, filling in for Vin Brown took the first set 11-9 against Rod Healy, it looked like an upset might be brewing.  Healy, forever the master of retrieving matches that appear lost, (when he is not just winning outright !) recovered from Sam’s first set onslaught to even the score with wins in the next three sets.

Quentin Clark dominated Claire Ljubic, Ljubic only looking a threat in the second set, with Clark winning 11-7, 14-12, 11-5.  And the two winners, Sergi and Clark pushed the score out to 3-1 when they won the first doubles against Healy and Ljubic in five.

Sergi started well against Healy, in similar fashion to Hensgen, winning the first set 11-9.  Once again Healy was able to escape, on this occasion Sergi almost had a two set lead, as he led 10-7 in the second, but Healy took five points in a row to deny him the advantage.  After that Healy was untroubled, winning the third and fourth sets 11-4, 11-4.

The next game was one that went begging for Regional Taxation Services.  A win in this rubber would have made their lead 4-2, instead Marcus Cimino, two sets down against Quentin Clark managed to escape defeat, and brought the scores level.  Clark looked to be in no trouble at all.  He won the first set 11-1 !  The second was also his 11-8, and considering their rankings, Clark a number one, Cimino a three, who would have bet against Quentin?  But, Cimino chased everything, frustrating Clark, whose forehand drives became more erratic as the game wore on.  The third set went to Cimino 11-7; in the fourth Clark held match points but could not close the match out, Cimino taking it 15-13 to make it two sets all.  And in the fifth, Cimino now with confidence sky-high, simply waited for Clark to stumble, and he took the fifth 12-10.  Asked about the game later, Marcus said, “It was all a bit of a blur !!”  Clark’s confidence disappeared after that rubber, and with him playing in two of the next three rubbers, the result was made easier for Mallee Meats as his game did not recover.

After looking a threat against Healy earlier on, Sam Hensgen met a quick end at the hands of Claire Ljubic, losing in a quick-fire three set contest.  Then Clark, partnered by Hensgen, faced Cimino, teamed up with Healy, again in the second doubles.  The Regional Taxation Services pair did take a set, but Healy and Cimino playing with confidence, won 11-9, 4-11, 11-7, 11-9.

Regional Taxation Services were now on the brink of defeat, and needed to win the next two rubbers just to draw level, and force the game to the eleventh rubber.

So, next week the two top sides, Tankard Dental and Mallee Meats, play in the Grand Final.  Mallee Meats will be hoping Claire Ljubic has a better night than she did in the Semi Final game against Tankard Dental, who have a side of big hitters, Michael Hensgen, Zac Healy and Rohan Reimers. 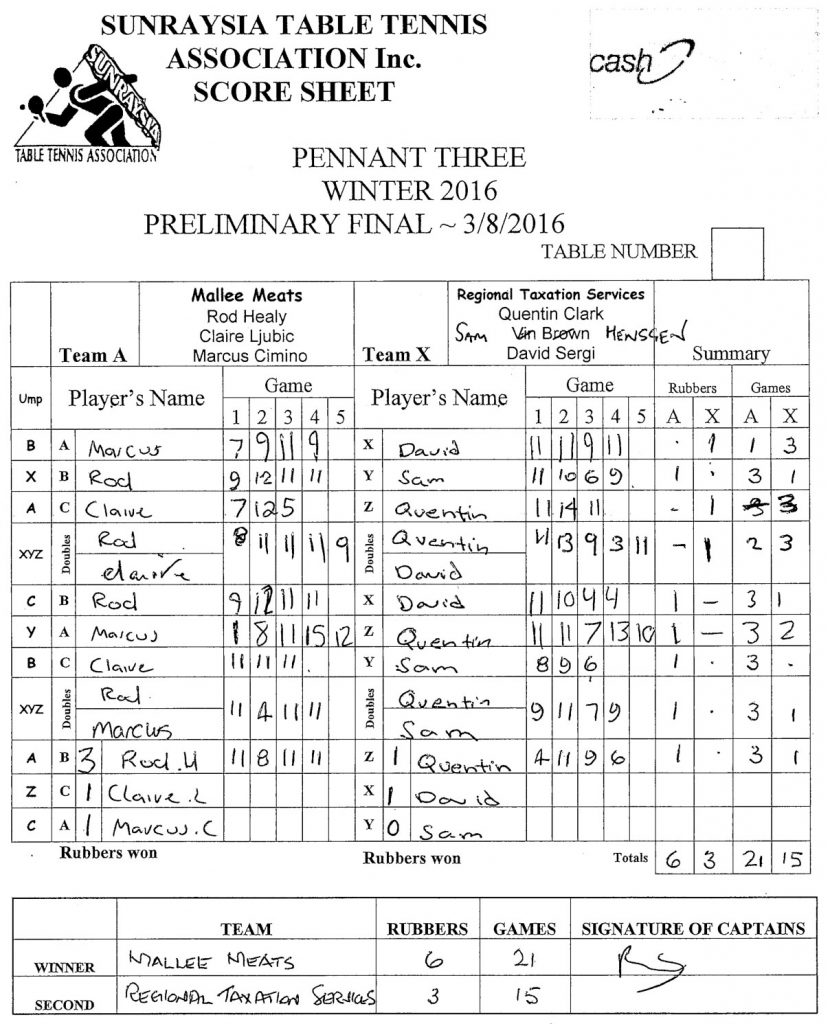 Fri Aug 5 , 2016
PENNANT FOUR: As in pennant one and two this preliminary final went to the wire with a 6-5 result and unfortunately for the ladder leader Weightmans Packaging they were on the wrong side of the result. Oh so close, they lost their last three matches of the season including two […]