SHOW ME THE MONEY! 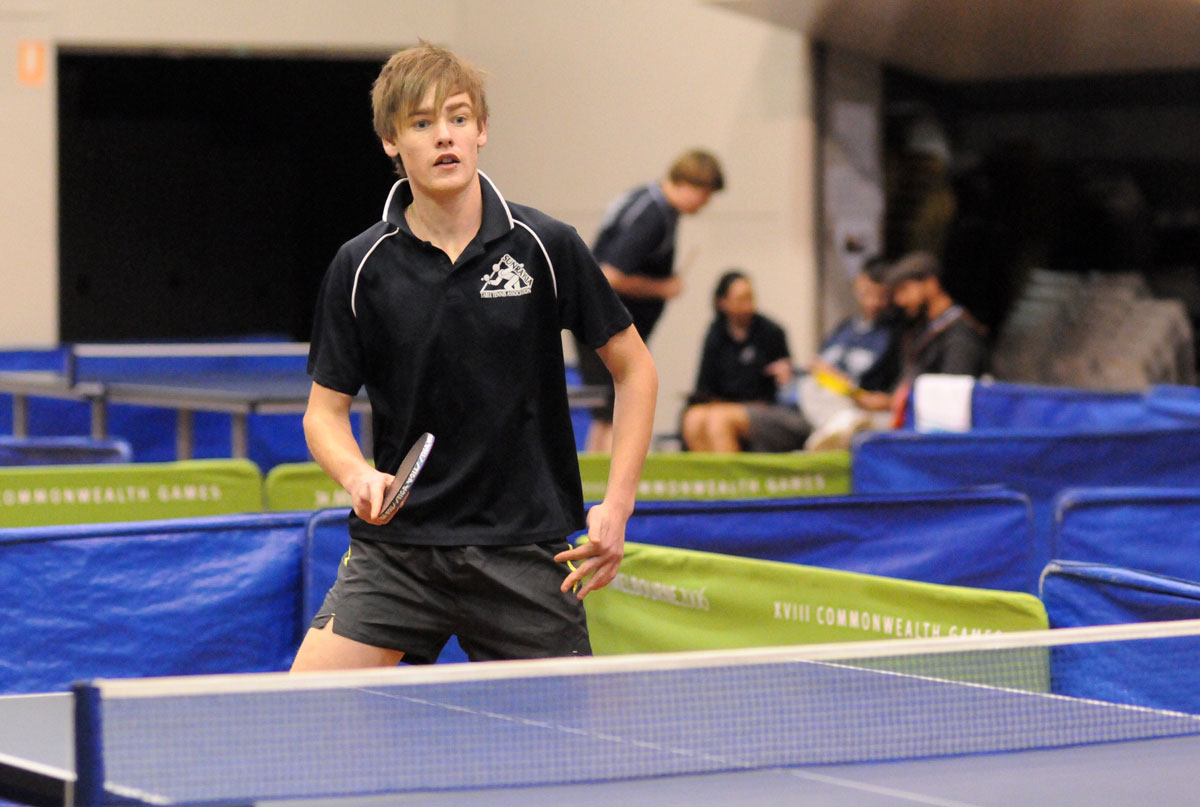 Leon ‘The Money Man’ Brown took Rnd 1 honors with 3 big singles, the highlight being a four set win over Exposed no.1 Matt Ljubic. Now Leon may tell you, ‘No great surprise …. this day was coming’!

The feature of round one of the Sunraysia Table tennis summer pennant was the opportunity taken by the players who have advanced from pennant two to the higher grade.

As is a common trend some of the pennant one players from winter take the summer pennant off and this is an opportunity for other players to show their wares.

The grading committee also increased the teams from the normal six to eight giving further players the chance to make a name for themselves leading into the next pennant. Players from lower grades to perform well were Sony Sefer, Reece Kurrle, Ash Morrison and Geoff Wright who all won two singles while fast improving youngster Connor Lavery showed he will not be out of his depth at a higher level.

The other big news out of pennant one in round one was the form of Leon “the money man” Brown who won three singles for the first time in his pennant one career.

His first match of the night was against the talented Matt Ljubic. Ljubic took the first narrowly and from here Brown lifted a gear and 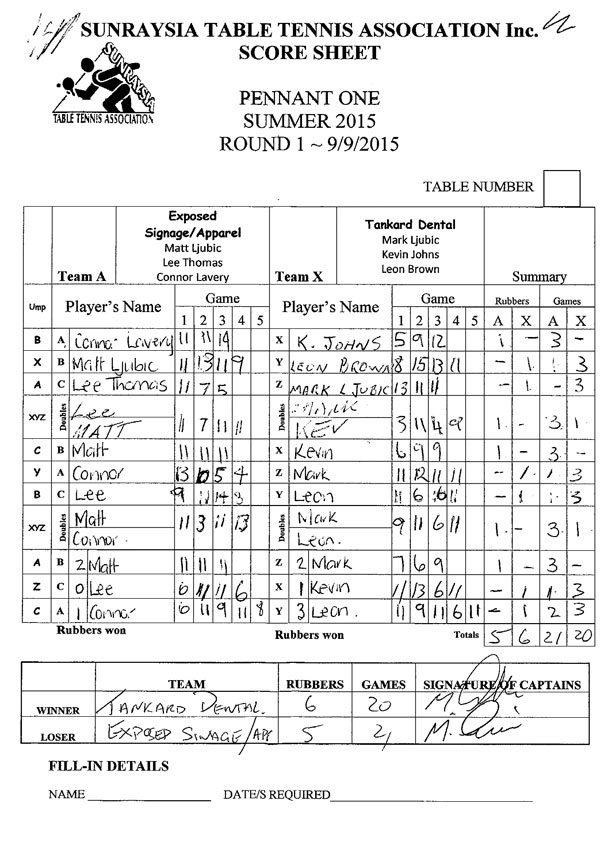 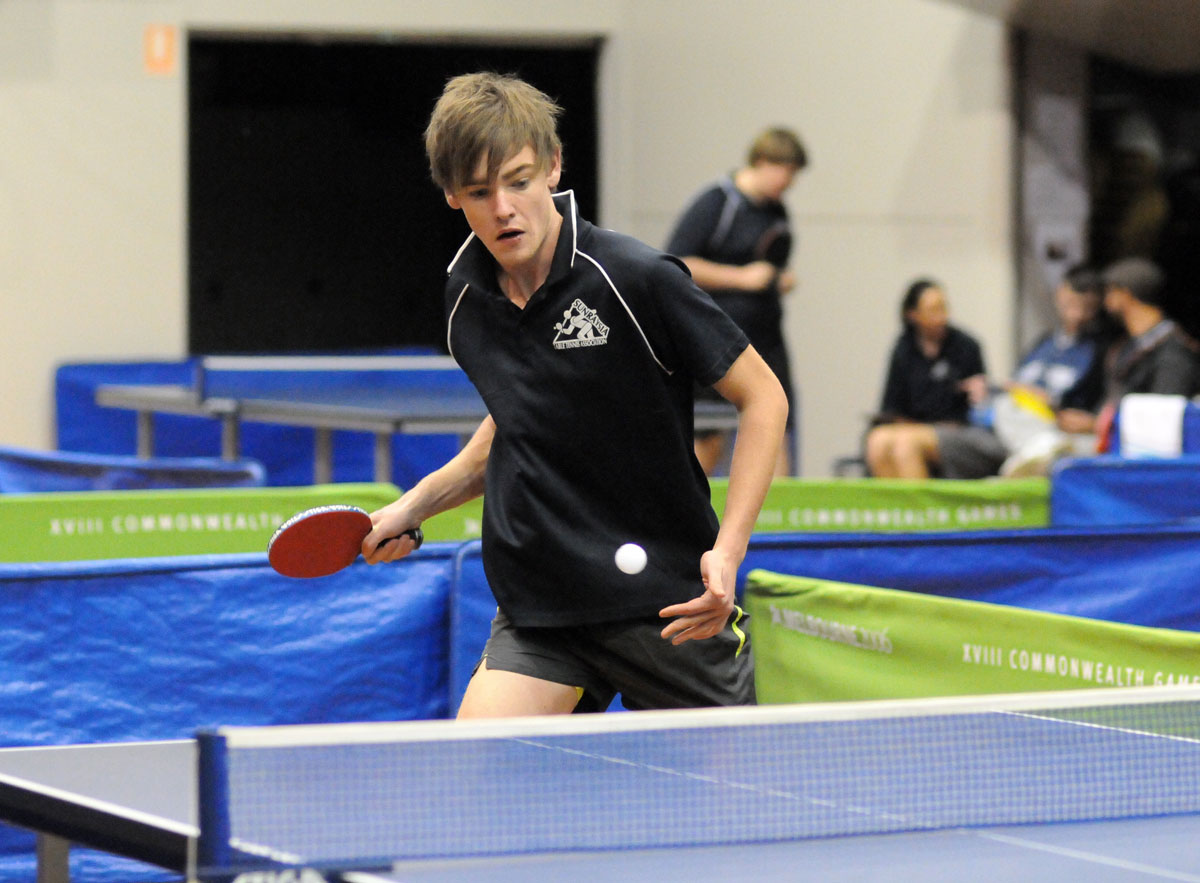 Mallee Bearings head the ladder courtesy of their 9-2 victory over Mallee Meats. On paper this match could have gone either way however Mallee 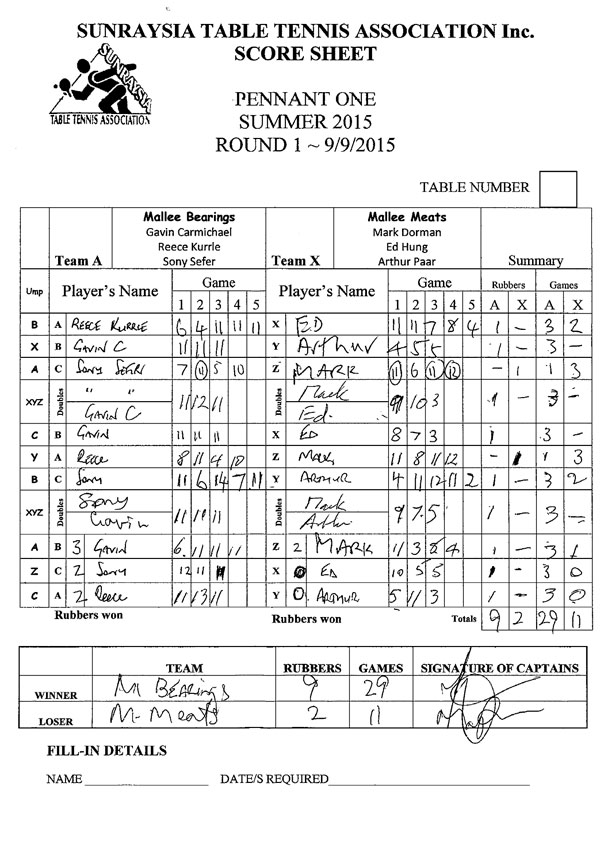 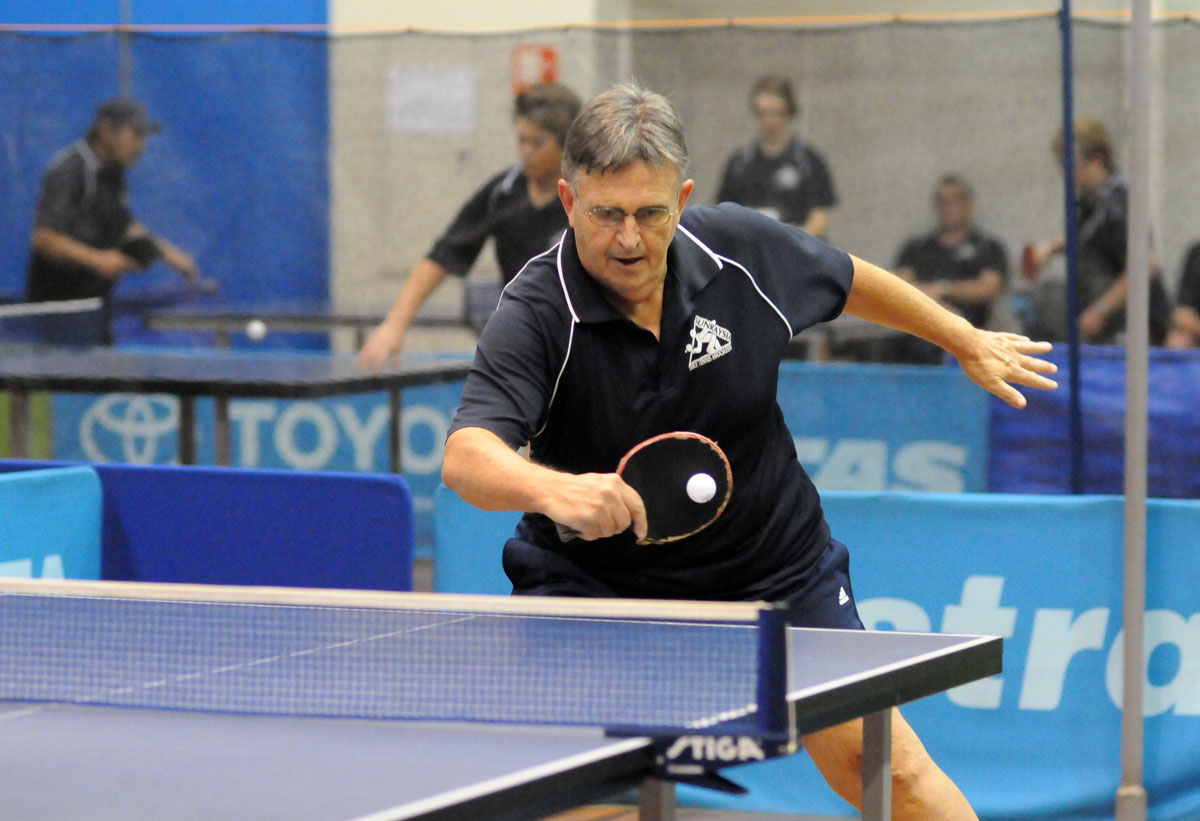 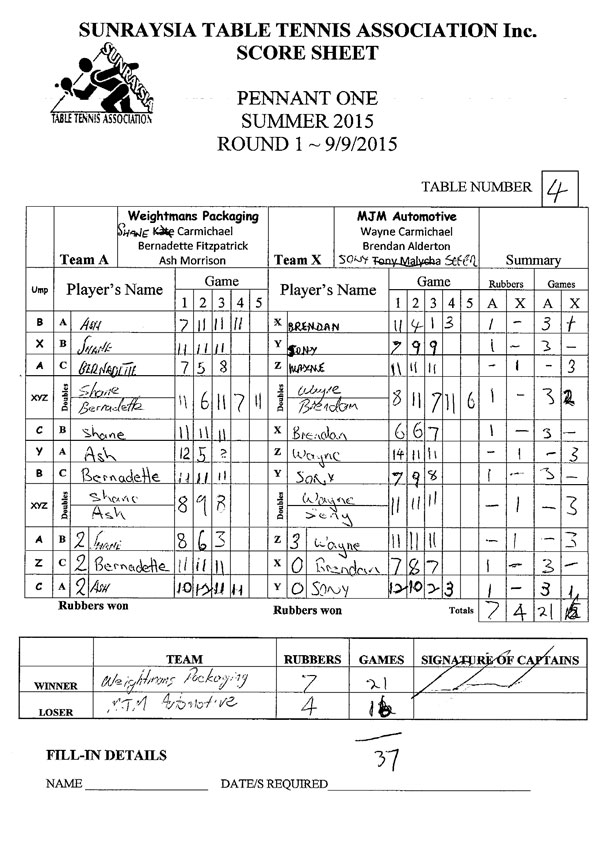 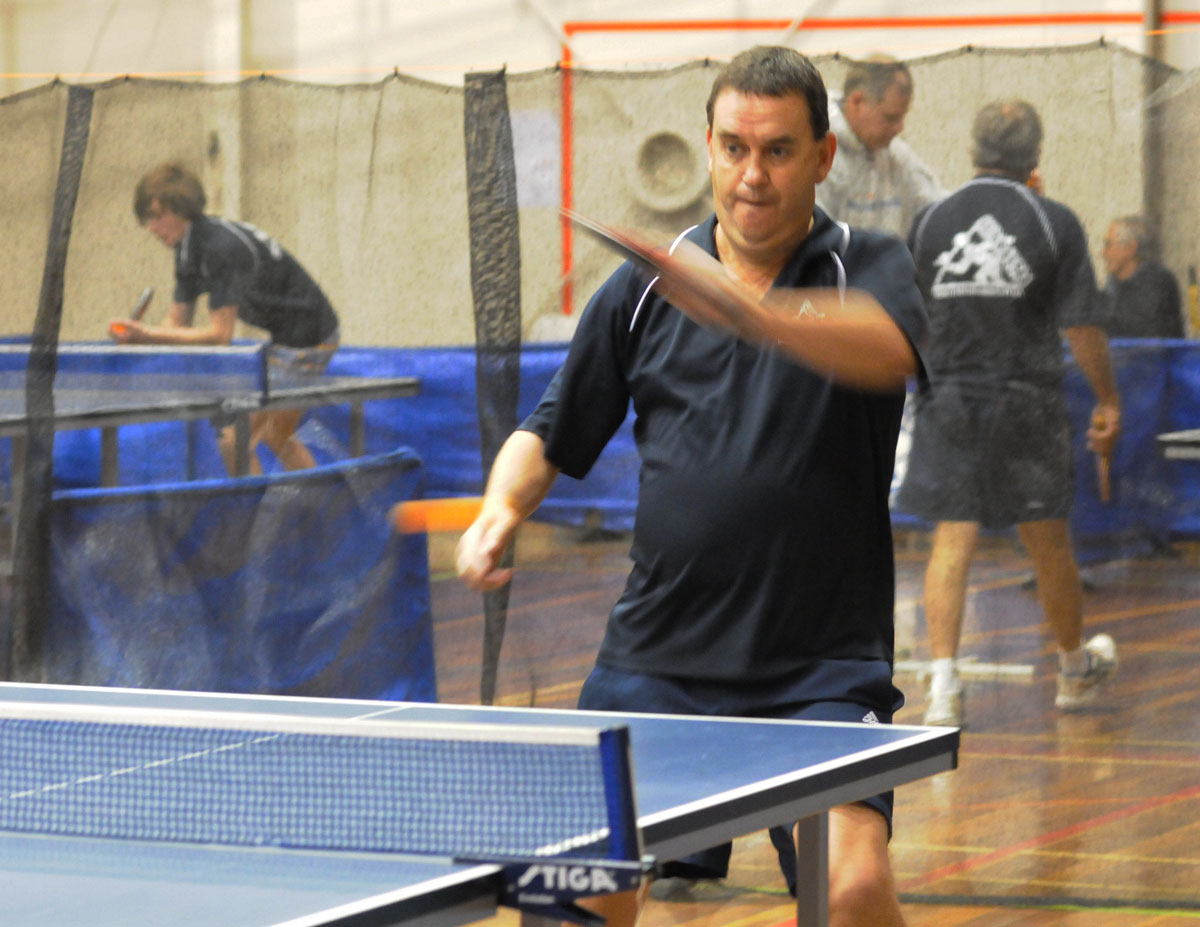 The remaining match was expected to be close however Fishers IGA recorded a convincing 8-3 victory over Max Miller Carpets. Fishers were well lead by skipper Jackson Tung who won three singles including an excellent four set win over young gun Matt Avers 11-9 9-11 11-6 11-9. There were many fine rallies in this match however Tung was able to take the points in his most consistent year of table tennis. Tung’s team mates Graeme O’Neill and Geoff Wright also played well to win two singles each giving their team an excellent start to the season 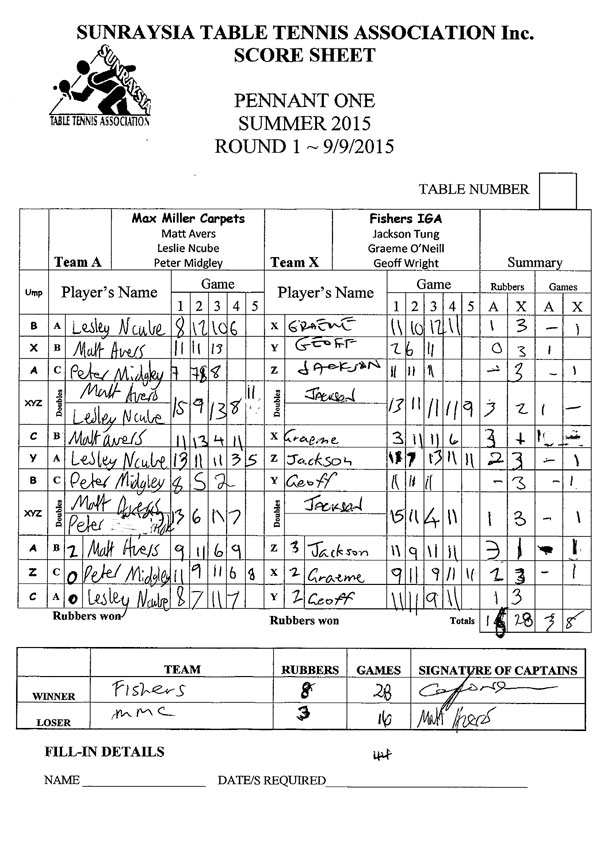 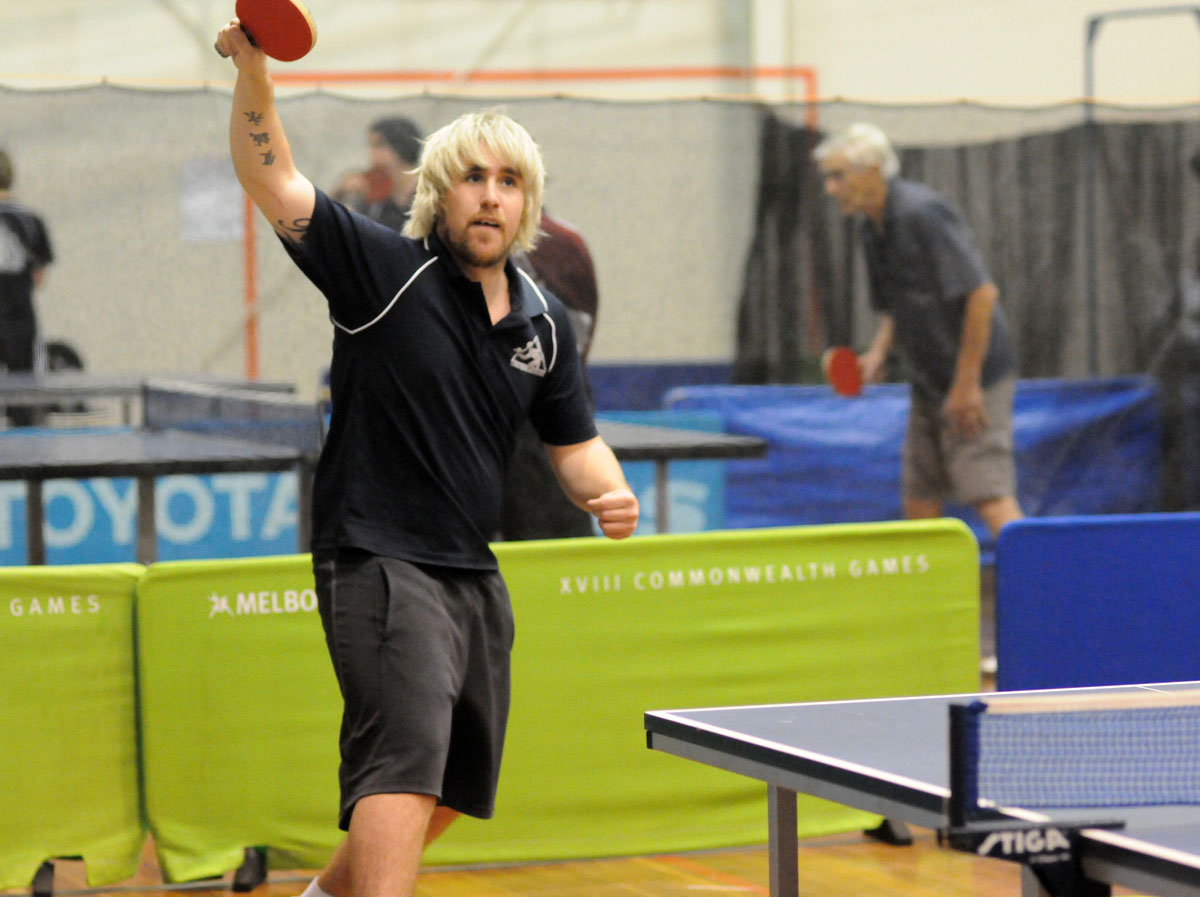 More than half the players being new to this grade, there were a few nerves amongst some of those newly promoted, but that won’t be a problem for long.

The matches all seemed to be at a good standard and reasonably close.

Mallee Bearings got off to a promising start — Russell managed to cope with young hopeful Quentin in three well-contested games.

Then they suffered a slight drought, losing the next eight matches.At about 10pm, they woke up enough to win the last two – thus going down for a moderately respectable 3-8 loss.

In the second match, Cambell, as Fishers’ number one would be expected to, beat Karly — but she made him work, taking the second game of the match to a marathon 15-13.

In the third singles, Geoff rallied from two games to one down to win in five against Rhys. Geoff went on to win his other two singles, both in straight games. Fishers won both doubles. The other singles went fairly predictably. Karly was the unlucky one — but she’s a fighter and will probably take revenge on somebody next week. Cambell and Quentin will be pleased with the grading committee putting Geoff in as a number two. 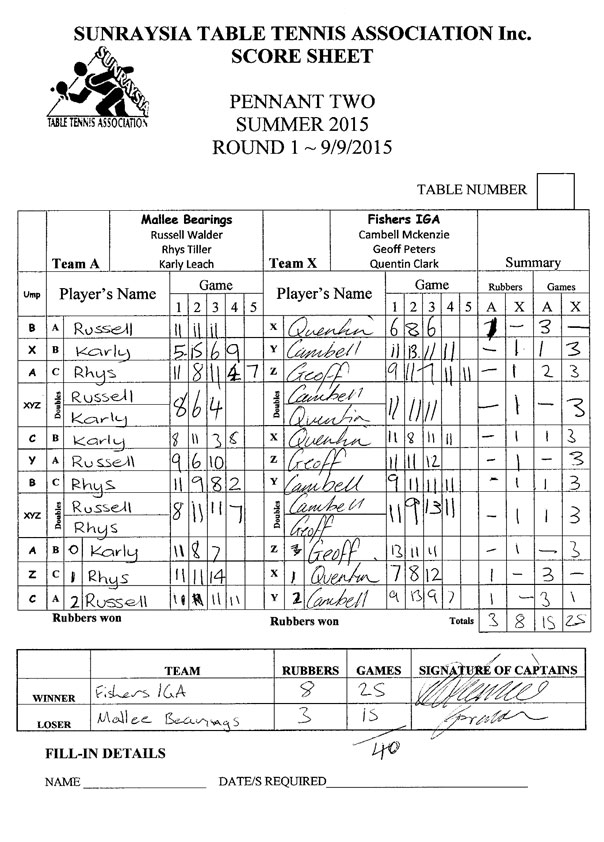 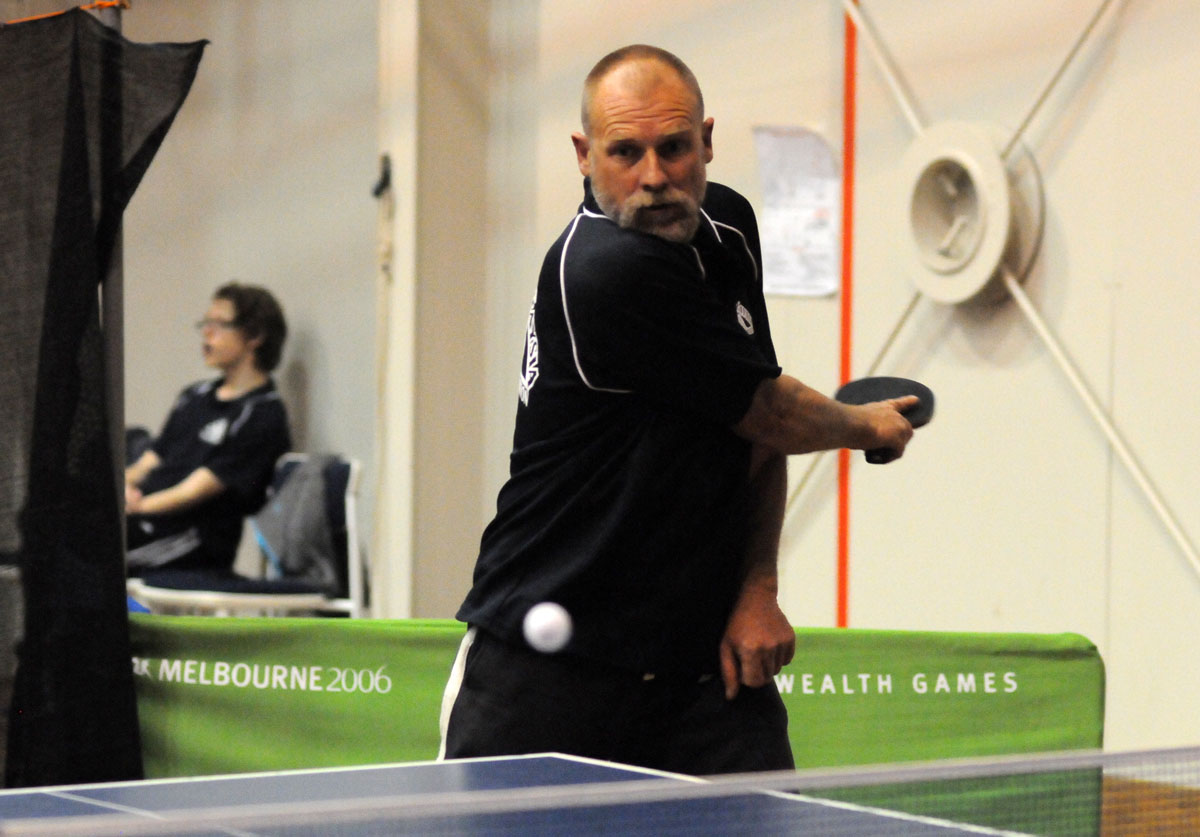 This was a closely contested encounter, four matches going to five games — and in nearly all matches at least one game going past 10 points all. Russell was filling in for Seval Fuat. He did a great job, winning all matches. He had to sweat profusely, especially against Terry. The doubles went one each. Most of the singles resulted according to expectations. Kerry didn’t win one. But those of us who have suffered at her hands on the tennis court know about her uncanny eye-hand coordination. She’ll soon adapt herself to this sport and become a force to be reckoned with. Watch out. 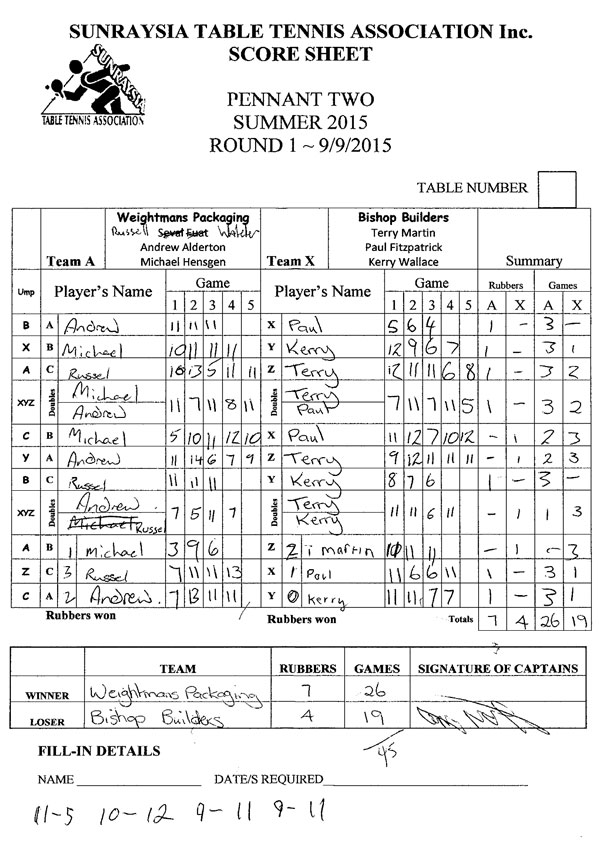 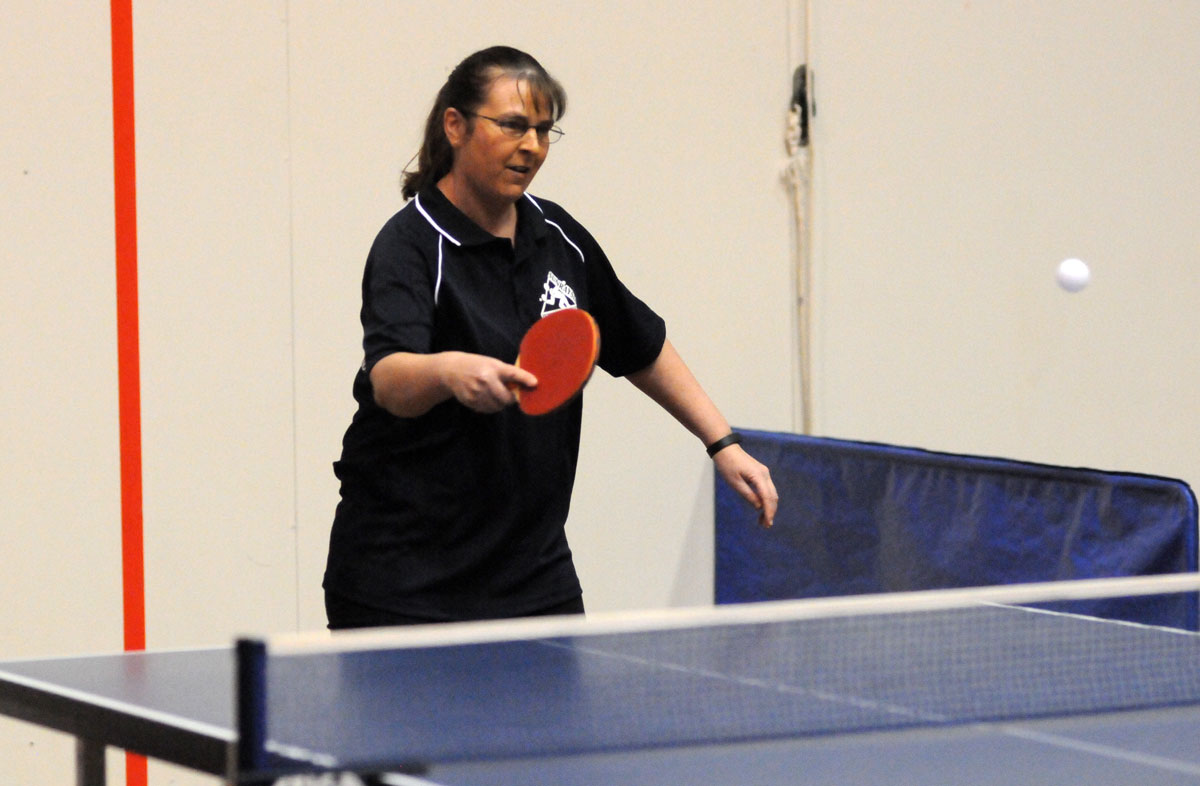 A close result and it could go either way when next they meet.

At one stage, Pinnacle were up 6-1 and it was looking like a percentage-building yawn – then MJM won the last four matches straight.

Everybody broke their duck and the contest was played in a good spirit.

Jason, who comes from a primitive country beyond the Tasman Sea, took a while to hit his straps, but in his second doubles and third singles, once he got going, he proved fairly unstoppable.

Jeremy’s matches, including his doubles, all went to five games — and he went within one point of winning the lot.

Peter Fitzo went pretty well. His effort in snatching victory from the jaws of defeat — after being down two games to zero was a credit to him — and a pain in the left ear for Jeremy.

Claire’s quick-fire, unorthodox style — as is the case with all Ljubic’s — had the opposition on the wrong foot most of the time.

Sam Played well. When he hits the ball it stays hit. His prospects are bright.

Arnold is a bit too old to merit much comment. He often wins a few matches early in the season before the younger recruits work out his curly serves. 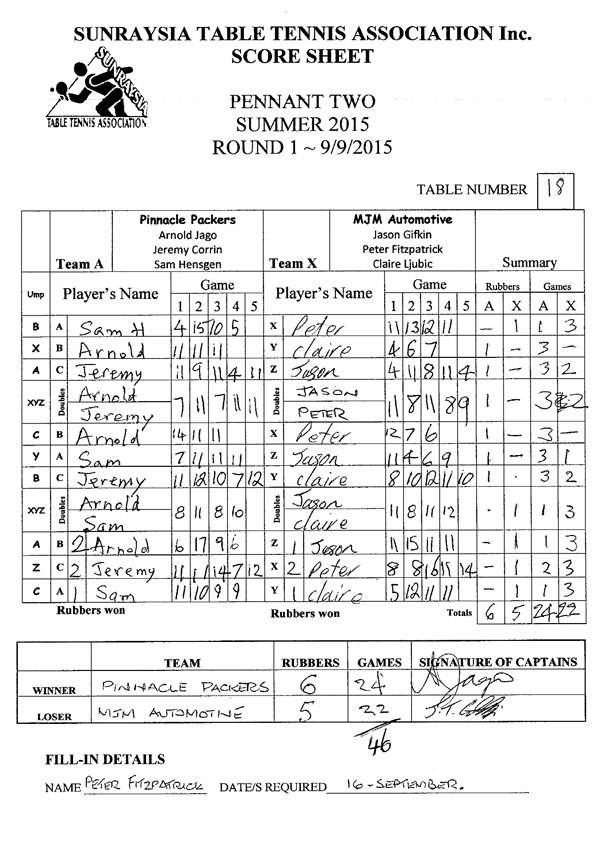 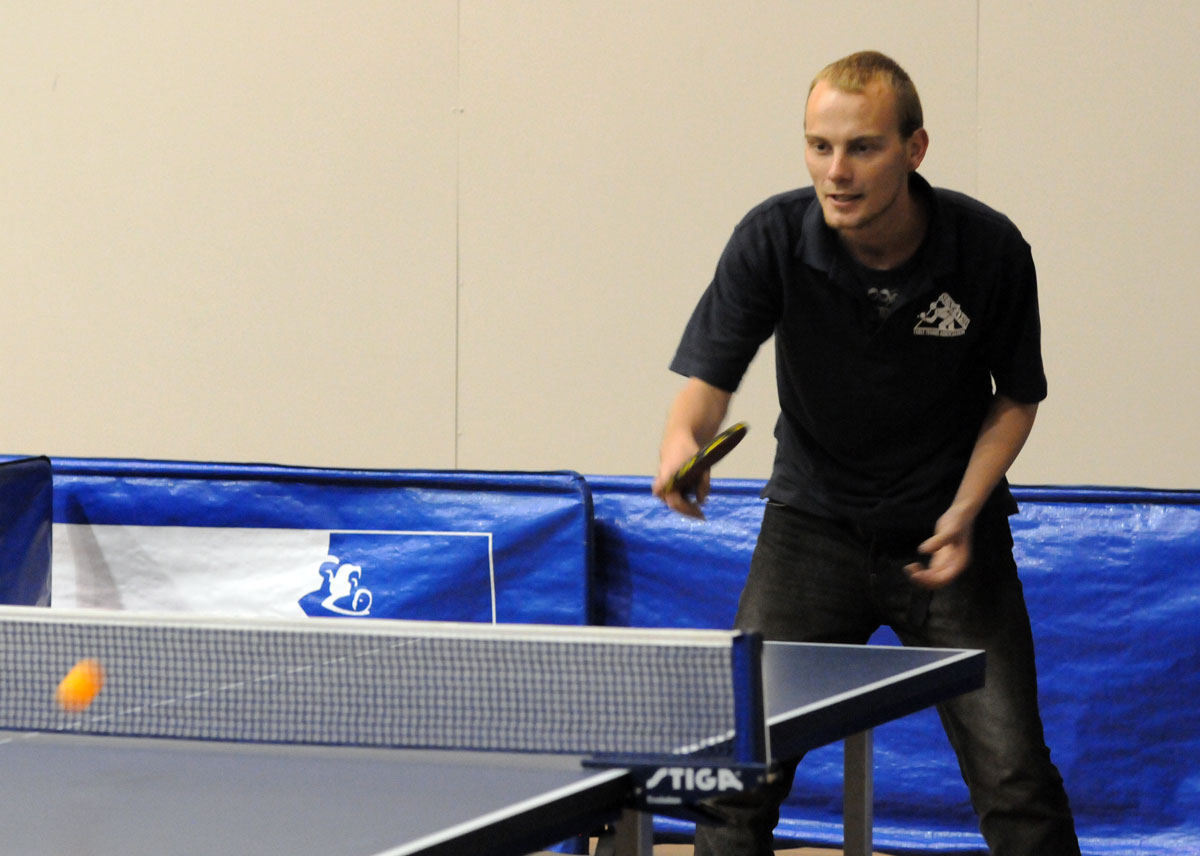 This pennant will consist of five teams and should be a close competition, there are 6 players playing their first senior pennant, so welcome and good luck to them.

After dropping the first match of the night Tankards were able to gather momentum and win eight of the next nine matches to comfortably take the match 8-3. Both Winston Easterbrook, filling in for daughter Kim Avers, and new playerMarcus Cimino won three singles each. This in particular was a great effort by Marcus who was up against some good opposition. His match against Stephan Ljubic was a match of real concentration and close all the way, the final result Marcus taking the points 11-9, 14-12, and 14-12. As well as winning three singles Winston Easterbrook completed a good night by participating in both doubles victories to give Tankards a great start to the season. 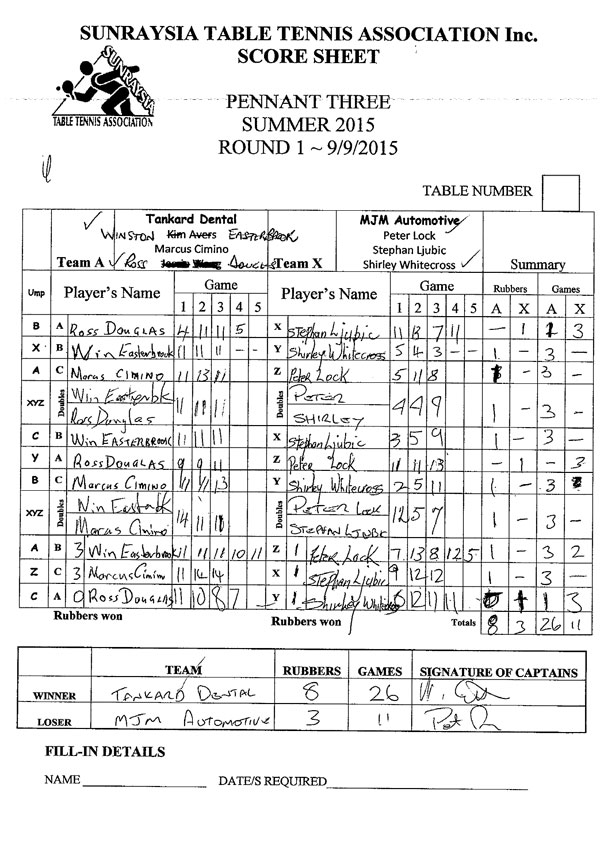 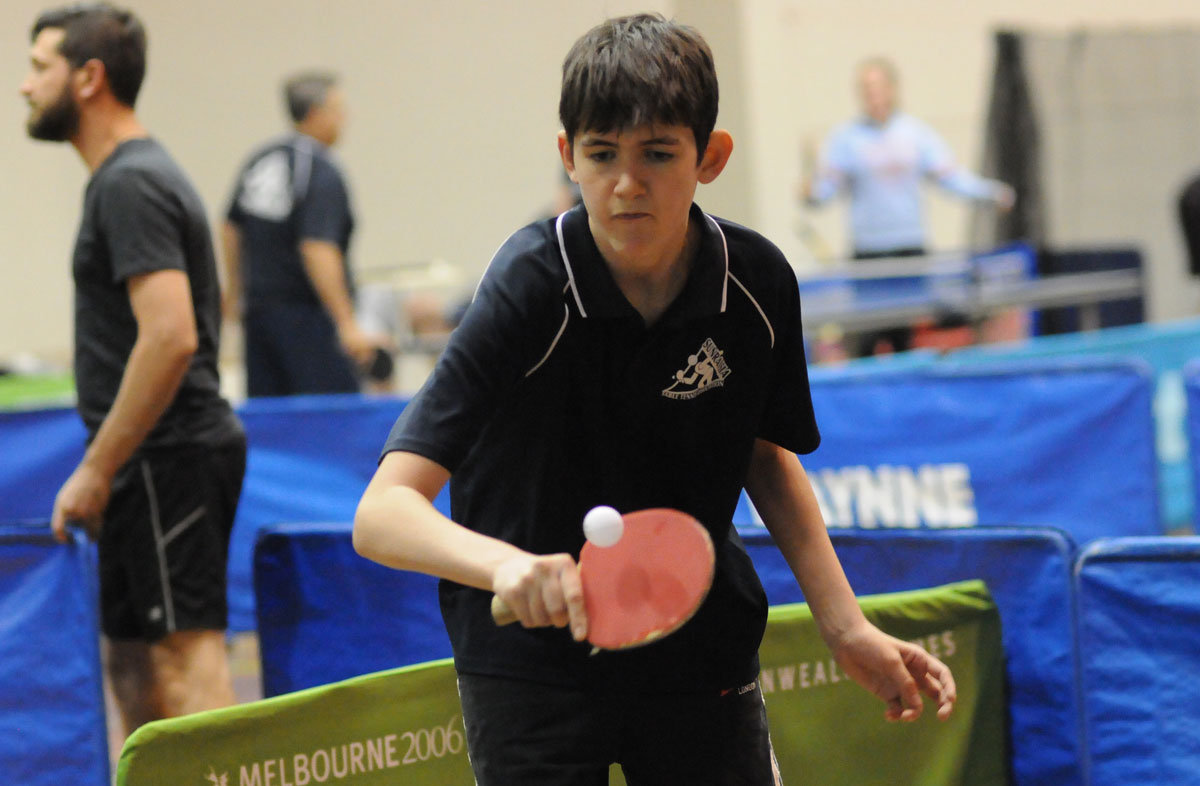 This match went to the wire. After jumping out of the blocks early and winning leading four rubbers to one it looked how far Fishers however Weightmans fought back brilliantly to lead 5-4 with two rubbers to play.

The first match was a battle between two junior players playing in a senior pennant for the first time. Brice Lock who had the bye received the call up at late notice and his match against regular junior fill in Zac Healy was vital in the final result. Zac took the first and then Brice gained control winning 8-11 11-4 11-9 11-5.

When Weightmans trailed 1-4 the skipper Daniel Griffiths lifted defeating Brice Lock in four and then Anthony Sergi outlasted Ben Hosking in another five set struggle 4-11 5-11 11-5 11-4 13-11 a great comeback by Anthony after being defeated by Ben comfortably in the first two games of the match. Amazingly Weightmans then levelled the match with another come from behind win. Griffiths and Sergi again recovered from a 0-2 deficit in the second doubles to defeat John Fitzpatrick and Brice Lock 3-11 7-11 11-5 12-10 11-6. There was a real contest on now as Weightmans were surging.

The match stood at five rubbers all and what a finish it proved to be. Youngster Brice Lock in his debut up against Anthony Sergi who had come off a consistent winter pennant. Brice grabbed the first and then Anthony the second and third, Brice then took the fourth. What a finish it proved to be as both players battled for victory. In the end in a marathon game Brice took the fifth 16-14 to give Fishers an exciting win.

This was a great effort by Brice in his first match in seniors to win two singles in such a close contest. He will take some confidence from this into his junior grand final this week. 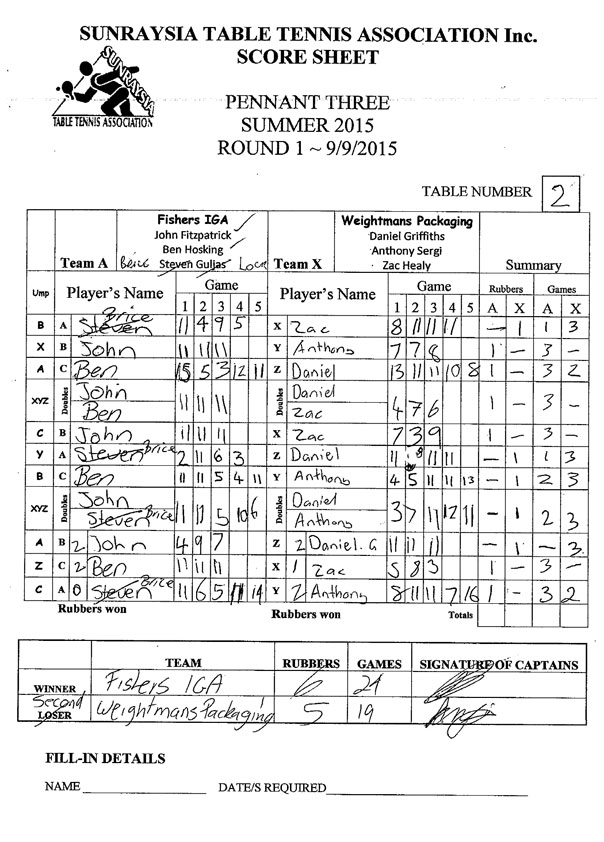 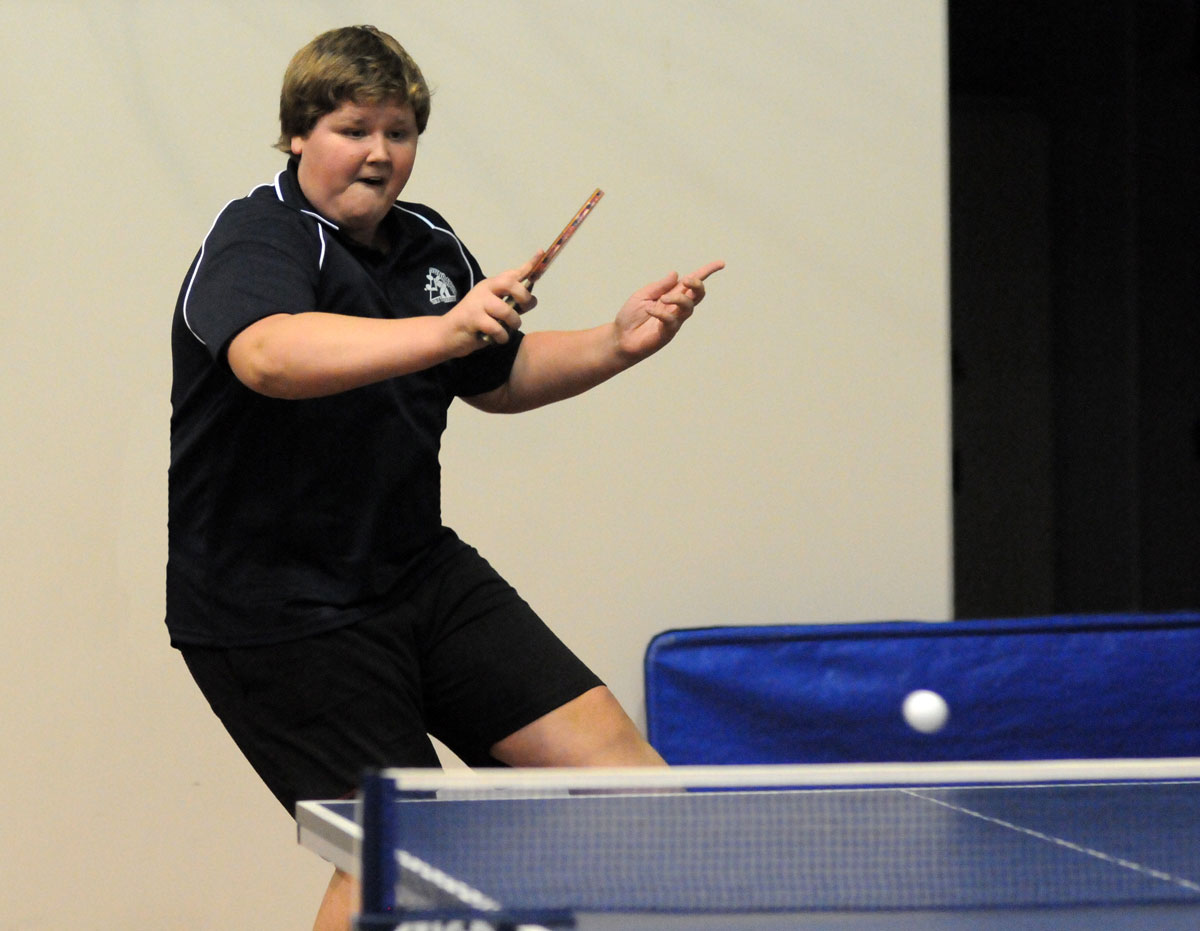