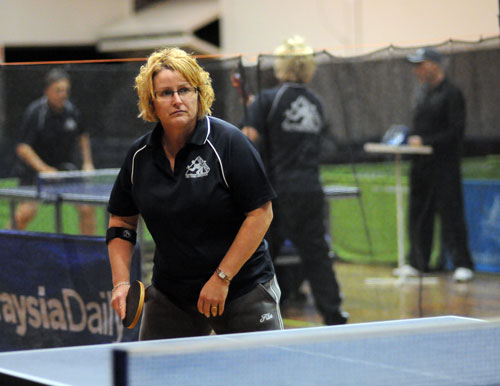 LEE Thomas has validated her promotion to Pennant 1 with a solid win over Kevin Johns to give Pinnacle Packers a last-gasp win over Fishers IGA in Sunraysia Table Tennis Association’s Winter Pennant.
Young star Dillon Chambers’ three singles wins, and his dominant role in both doubles, was not enough to keep the Packers at bay, with Thomas, Joel Dorman and Shane Carmichael contributing two singles wins each in Fishers’ 6-5 victory
Thomas effectively won the match in the first rubber, with cliff-hanger win over Peter Bishop that ended 14-12 in the fifth.
Young leftie Joel Dorman downed Johns in four sets, before Chambers got Fishers on the board with an 0, 3, 6 eclipse of Shane Carmichael.
Chambers and Johns dismissed Dorman and Carmichael in three sets in the first doubles, to level the scores at 2-all.
Dorman and Carmichael had no answers for the ideal tactical combination of Johns’ patient, reliable defence, and Chambers’ near-unplayable topspin in the first doubles, going down in straight sets.
Dorman beat Bishop in four sets, and Carmichael downed Johns in three, to give Pinnacle Packers a 1-rubber lead doing into the second double.
Packers’ No 1 Dorman stood down for the second doubles, leaving Carmichael and Thomas to confront Chambers and Bishop. They stole the first set, before going down in four.
Chambers showed why, at only 14, he is one of Australia’s hottest young players in both the U15 and U18 age groups, with a merciless 6, 2 and 4 win over Dorman in the clash of the No 1s.
Fishers edged ahead 4-3, but it was one-way traffic in the remaining two singles. Carmichael downed Bishop in straight sets, then Thomas sealed the win by defeating Johns.
WEIGHTMANS PACKAGING VS MALLEE BEARINGS 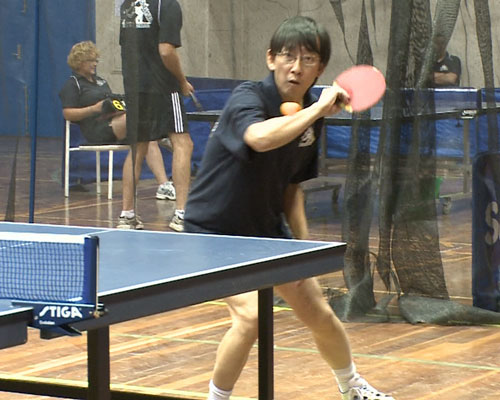 The other Pennant 1 match also ended in similar circumstances, when Mallee Bearings’ Ed Hung overcame Weightmans Packaging’s Peter Midgley in a tense five-set decider.
Mark Dorman had earlier kept Weightmans’ hopes of a win alive with a surprise 4-set win over an uncharacteristically erratic Wayne Carmichael. Dorman blunted his fellow leftie’s heavy topspin attack, then broke down his forehand with net-skimming defence, to win 11-9, 9-11, 11-4, 11-9.
Mallee Bearings’ Graeme O’Neill defeated Ed Hung in four, Peter Midgley lost to Wayne Carmichael in three, and Mark Dorman had a wobbly five-set win over defender John Gray, filling in for Jackson Murphy.
Carmichael and Gray defeated Dorman and O’Neill in the crucial first doubles.
In the second round of singles, Carmichael downed O’Neill in straight sets, Ed Hung lost Dorman, and Gray frustrated Midgley over three sets.
Carmichael and Hung narrowly beat Dorman and Midgley in the second doubles, before Dorman wore down Carmichael to level the scoreline at 4-4.
O’Neill had too many weapons for Grey, winning in four to level the match,  but Ed Hung played tail-end hero again, downing Midgley in five to give Mallee Bearings its 6-5 victory. 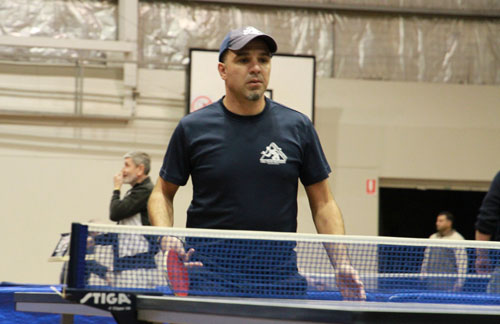 In Pennant 2, Spanline ground out a 6-5 win over Fishers IGA by winning both doubles. Fishers’ Sony Sefer was the standout on the night, winning three singles. 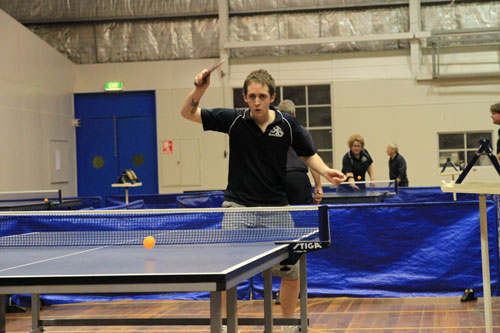 Playing as a stand-in, Sefer won two singles to help a depleted Mallee Bearings to a meritorious 6-5 win over Pinnacle Packers, despite three singles wins to the Packers’ Daniel Jansen. 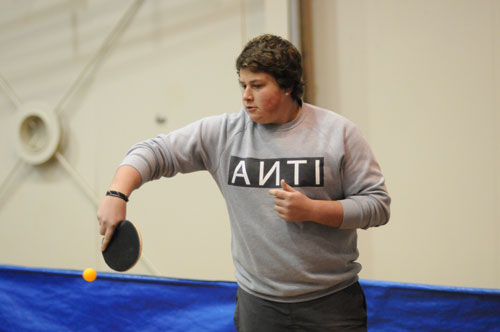 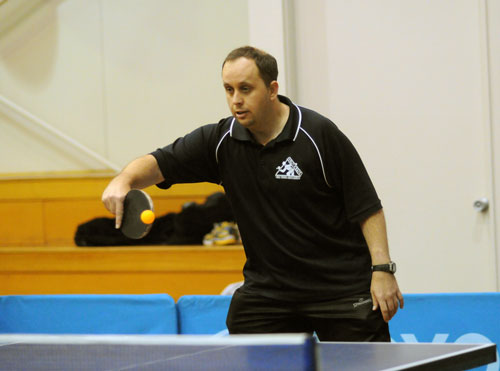 Weightmans Packaging scored a big victory in this match to sit at the head of the ladder the only team with two victories at the completion of round two. Skipper Darren Greaves is showing that married life hasn’t hurt his game by again winning three singles for the second week in succession, the only player in pennant three to achieve this feat. Team mate Lachlan Kelly also won three singles as his game continues to improve. His three victories all came in five setters each time recovering from a deficit of two games to one to outlast his more experienced opponents. The score line of 10-1 was not really an indication of the match as there were four five set contests which could have gone either way, however in the end the scoresheet reveals a percentage booster for Weightmans Packaging.

Weightmans number three Jeremy Corrin also won two singles and for Mallee Bearings Sabrina Fitzpatrick fought hard to get her team one success for the night when she accounted for Corrin 11-3 8-11 11-5 9-11 11-7 in a match of concentration and lengthy rallies. 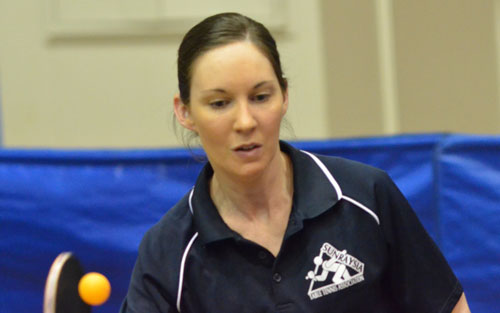 Going into this contest both teams were keen for victory. The Packers narrowly went down in a thriller last round and Fishers were playing their first match of the season after having the bye in round one. Before the match Fishers lost skipper Peter Kelly and Andrew Lewis and they were replaced by Andrew Cottrell and Karly Leach respectively

This was a match played in two halves with Pinnacle Packers racing to a 4-1 lead early and looking the goods. The first singles was a beauty with Fishers Karly Leach outlasting the steady Leonie Dunkley in a four set tussle 14-12 10-12 11-9 12-10, every game decided by the barest margin. From this point the Packers rattled off four victories in succession. Damen Southgate won two singles in this run and combined with Gary Hughes to win a thriller in the first doubles 11-6 7-11 11-6 10-12 11-9 against Harrison Cottrell and Karly Leach.

Fishers knowing they needed to lift, then bounced back winning the next four matches to amazingly lead 5-4. Stand in skipper Andrew Cottrell led the way winning two singles including an impressive come from behind win over the talented Damen Southgate 4-11 8-11 11-5 13-11 13-11. Earlier Cottrell combined in the second doubles with his son Harrison to grab the second doubles 7-11 5-11 11-6 11-5 11-5 over Southgate and Leonie Dunkley in another thriller after trailing two games to love.

With his team down 4-5 Gary Hughes then accounted for Karly Leach in a close four setter. Hughes was successful 11-9 8-11 11-9 11-8 and the match now stood at five rubbers all. Fishers’ youngster Harrison Cottrell then matched up against the steady Leonie Dunkley to decide the match. Again we witnessed a great match with young Harrison showing maturity beyond his years to go on and win 11-4 9-11 11-6 13-11.

This had been a tremendous fight back from Fishers to come back and win 6-5. For the victors Andrew Cottrell and Harrison Cottrell won two singles each while Karly Leach won one. This was a tremendous team effort however the performance of Harrison Cottrell in his first season of senior table tennis was noteworthy. He is a product of the strong junior competition and is a player to watch in the future. 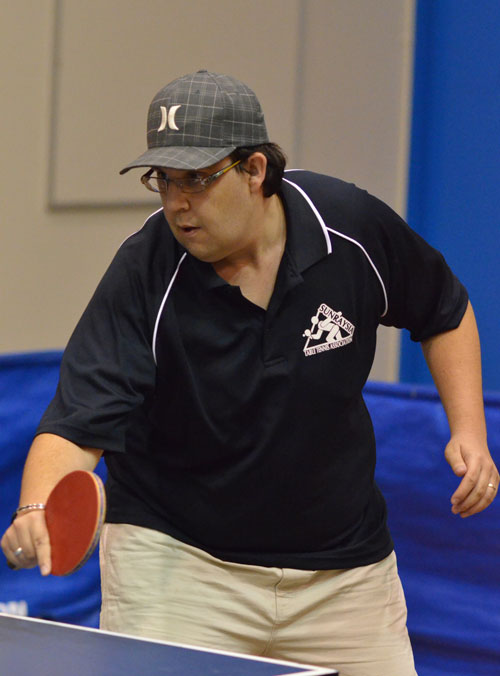 With an even team performance Max Miller Carpets proved too good for their opponents winning 8 -3 to remain undefeated and sit one win clear at the top of the pennant four ladder. Ben Hosking, Cole Keegan and Georgia Tilley all won two singles for the victors. Skipper Hosking combined with each of his team mates to have success in both doubles.

Sam Hensgen for Bishop Builders enjoyed a good night winning three singles for Bishop Builders. He now sits at the top of the singles aggregate undefeated, after two rounds. His match against opposing skipper Ben Hosking was a good four set battle with each game decided by the barest margin. Hensgen prevailed 10-12 13-11 12-10 12-10. Hensgen earlier had his hands full with first year player Cole Keegan who possesses a big forehand drive. Hensgen took the points in an entertaining five set slog 11-5 4-11 11-8 16-18 11-5. Despite being very young and in his second match Keegan showed that he will be a very good player and will improve rapidly. In this round he accounted for his dad Geoff 11-4 11-8 11-2 in the clash of father and son enabling Cole to have the bragging rights until they meet next. 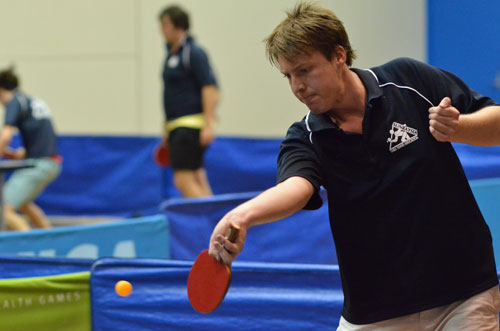 In round one both these teams went down 6-5 and in yet another close result Fishers IGA took the points 6-5 against the unlucky Mallee Bearings. For Fishers, skipper Ryan Hensgen played well to win three singles. His team mates Kerryn Greaves and Helen Frania each won an important singles to enable Fishers to grab their first win.

For Mallee Bearings both Claire Ljubic and Shirley Whitecross won two singles each. In the first doubles they also combined to defeat Hensgen and Kerryn Greaves in a great five setter 11-4 6-11 11-6 8-11 11-9.