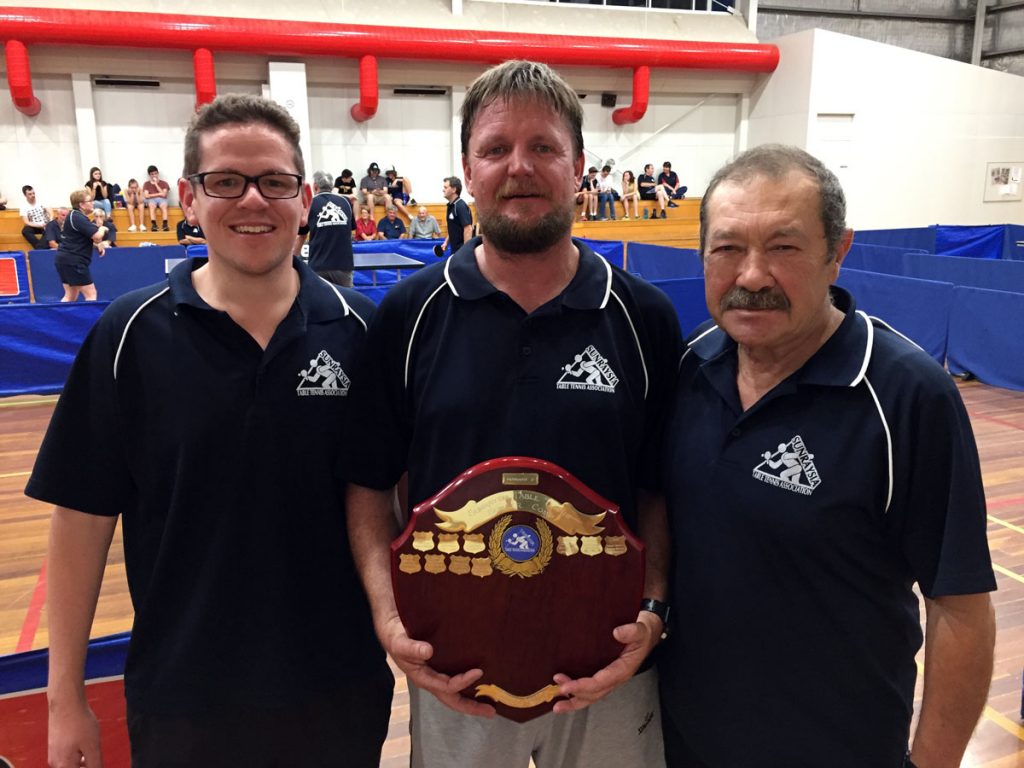 At the conclusion of the home-and-away season, Pinnacle Packers were the most successful team in this grade, having lost just one game.  Mallee Bearings finished second, two games behind, and significantly those three games were at the beginning of the season when Ashley Morrison’s team-mates Brendan Alderton and Seval Fuat were both absent.

From Round Four though, this side showed they were a force to be reckoned with.  Fuat played the rest of the season, however Alderton actually only played three games out of the eight rounds.  What this is all leading to is that once Morrison had one or both of these team-mates, his side remained undefeated, and in Round 5 inflicted that single defeat on Mallee Bearings.

So, Pinnacle Packers deserved favouritism for this game, even if raw numbers did not seem to back it up.

Once the game started, it was clear they were going to be hard to beat.

Brendan Alderton, a notorious slow starter, dropped the first set to Claire Ljubic 11-4, but that only spurred him into action.  Alderton hardly gave Ljubic a chance after that, winning the next three sets 5, 4 and 5.

Seval Fuat almost provided the upset of the night in the next rubber.  Facing the aggregate winner, Kevin Johns, Fuat was on fire, and led two sets to love 11-8, 12-10.  Johns was under enormous pressure, and Fuat almost closed the game out in the third set, holding set point at 10-9, but Johns scrambled out of the situation to take that set 12-10.  He quickly made it two sets all with an 11-6 result in the fourth, but once into the fifth the nerves set in again, and he just managed to edge Fuat 11-9 to win the match.  (Fuat came close to the exact same thing in the Semi Final last week when he took Mallee Meats captain Peter Midgley to five sets, having held set points in the fourth and fifth sets).

So, one all, and Mallee Bearings seemed to be doing it hard.

Ashley Morrison soon made it 2-1 with a three set win against Terry Martin.  Martin was outgunned in the first 11-2, but thereafter this was a close contest, and indeed, it deserved to go to another set.  However, Morrison would have none of it, taking the second and third sets 11-9, 16-14.

Next up, the first doubles.  Johns and Martin, who later in the night would receive a trophy each for being the most successful Pennant Two doubles pairing for the season, faced Morrison and Alderton.  This was close from the start, and although they led two sets to love 11-8, 15-13, Johns and Martin knew this was no guaranteed three setter.  In fact, their worst fears were realised.  Morrison and Alderton chipped away at them, taking the third set 11-7, denying the Mallee Bearings pair a set point in the fourth, winning that 12-10, and holding them at bay 11-9 in the fifth.

Mallee Bearings were certainly in trouble at 3-1 down.

Johns made that 3-2, defeating number two Alderton in three sets.

Martin made it three rubbers for Mallee Bearings, dominating Fuat, to win in straight sets 5, 7 and 6.

In the scheme of things then, the second doubles loomed large.  If Mallee Bearings could continue their fight back, a win would make the scores 4-4, a loss would see them staring down the barrel of defeat.

Johns and Claire Ljubic must have thought it would be the former alternative at the conclusion of the first set, for they blasted Morrison and Fuat 11-2 in a very one-sided set.  Undeterred, the Pinnacle Packers pair set about squaring things up.  They took the second set with a confidence boosting 11-6 score line, and from then on, the two sides slugged it out.  Morrison and Fuat took a nervous 13-11 win in the third set, and in the fourth, made fewer mistakes than their opponents to take the set 11-8, and the rubber.

Leading 5-3, Pinnacle Packers knew victory was theirs to lose, and Ashley Morrison was not about to throw this one away.

The two captains met in the next rubber, and put on a great display, the match going to five sets.  Johns really was the better player up to the 2-2 mark of this game, winning 41 points to Morrison’s 32.  When he won a set, he won it convincingly, when he lost, it was by the narrowest of margins.  But in the fifth set it all came good for Morrison, who has a ferocious, if not particularly consistent, forehand drive.  In that fifth set he made nary a mistake, and had Johns scrambling at the other end.  So, the win and the shield went to Pinnacle Packers, Morrison finishing Johns off 12-10, 6-11, 11-9, 3-11, 11-5. 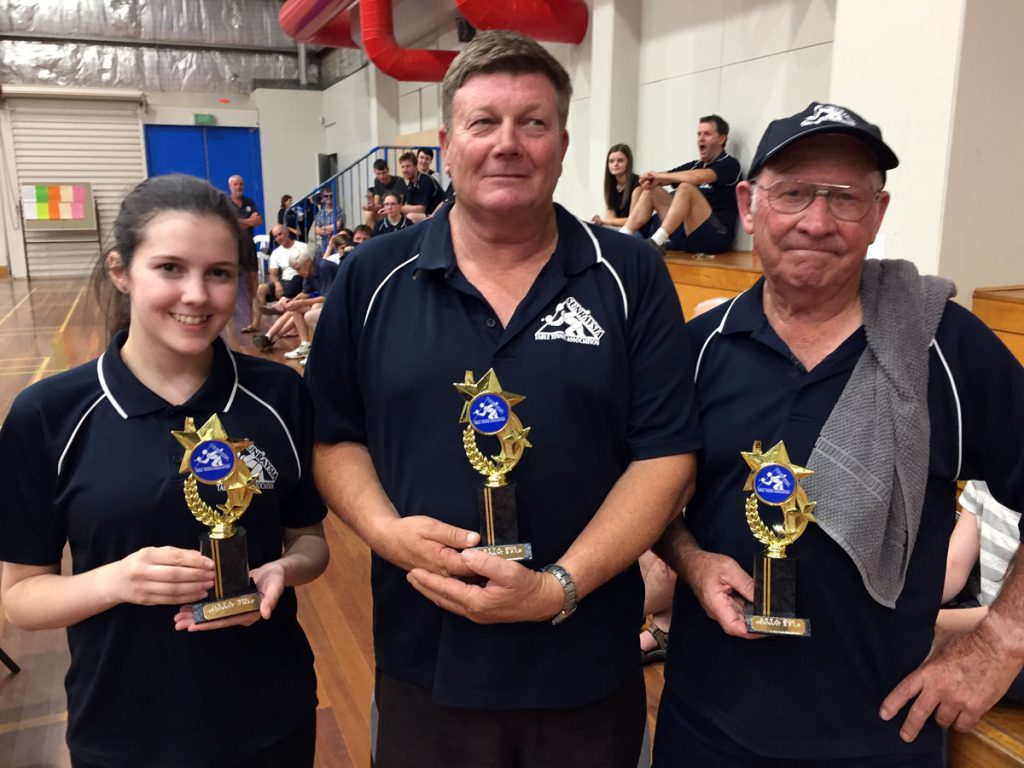 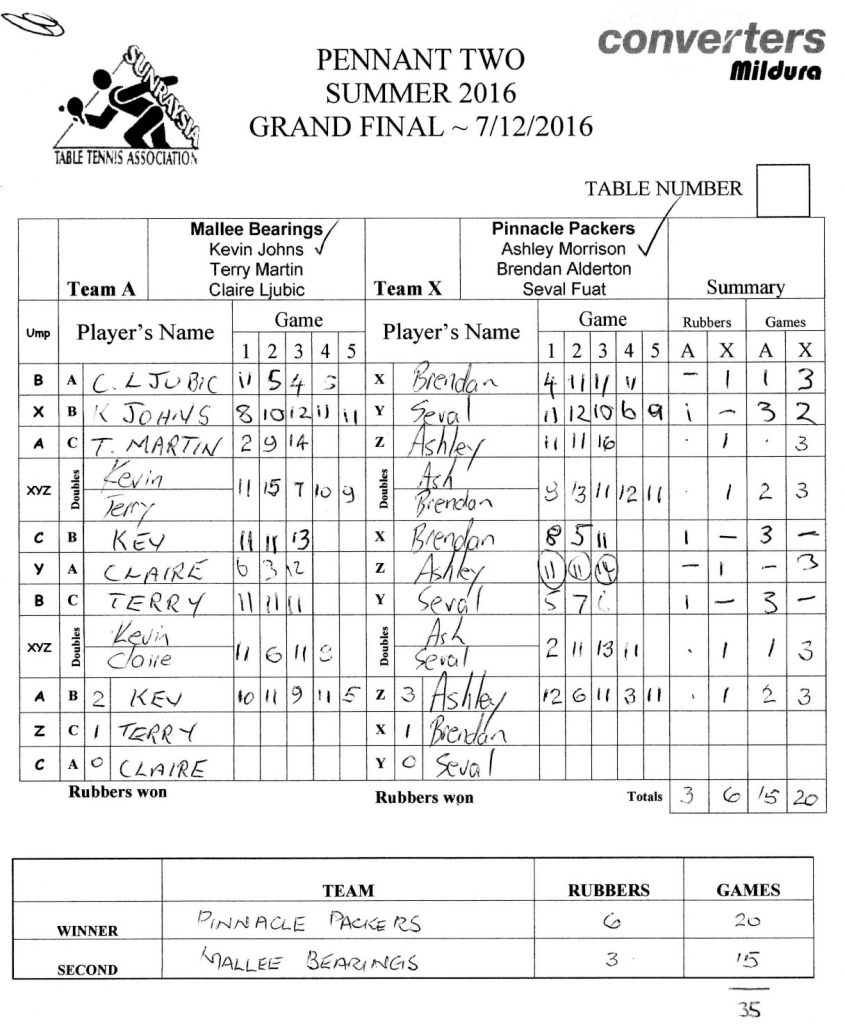 Sun Dec 25 , 2016
PENNANT ONE: After looking to be down and out early Exposed Signage/Apparel amazingly recovered from a 1-4 deficit to win 6-5 and are the 2016 Sunraysia Table Tennis Association “Cash Converters” summer pennant one premiers. Their season is an outstanding story given after round three they were undefeated on top […]